‘They say knowledge is power, I did not know that. I thought that with the children I have – I cannot have HIV, they are alive… I have an aunt who worked at a bank.  She noticed that I was losing weight… I was going to deposit some money at the bank.  When I entered they were testing for HIV, someone had come to test the staff. My aunt said: go there and test. Seeing that all my children are healthy I thought that means I don’t have HIV. Ha!

I tell you she helped me. I could have died. When I tested, the lady counselled me…  This thing (HIV), you think it cannot come to you… Fortunately for me… the first people I saw were my elder brother and my father because we used the same bank. I told them and I found that my father was able to accept this; up to today he is supporting me.

…I have requested the community leaders that I – though I have not said officially that I am living with HIV – I have asked them that in every meeting they should give me 10 to 15 minutes to teach about HIV because I see that people lack knowledge.

I remember one day my father gave me a car to drive. They were surprised to see me driving… they were walking, some using crutches – they were so afraid of the virus that they even feared riding in the car with me…you understand?.. I saw that they thought that I am no longer a person [like them]

There is a lot to be done and it is painful. I had asked at the clinic how we can work together… How can they use me to explain things to people?

…in our clinic they teach about HIV but men don’t come forward.  They…are the head of the family, but the decision makers don’t come…I am saying this because I am a man… I don’t know the answer but what I am sure about is that women do not have money – and money is power… If she asks for some money and the husband gives her that, the chances are that when they have sex, he will decide whether to use a condom or not.
Cebolakhe Siboza, male, 42 years, Swaziland 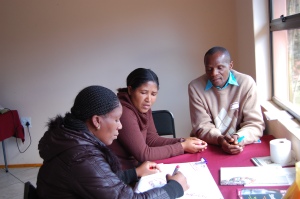 Every day from the 1st of July until the 21st of July we will be sharing extracts from 21 oral testimonies of 21 men and women living with HIV in Swaziland, Ethiopia and Mozambique. We’ll share these extracts here on this blog – with daily links on twitter and facebook. On the 21st of July, our partner the International Planned Parenthood Federation (IPPF) will launch a publication of these testimonies at the International AIDS conference 2014. Read more about 21 stories 21 days. Read more about the project