The People in the Pictures: vital perspectives on Save the Children’s image making by Siobhan Warrington with Jess Crombie is now available online:

Debates about the visual representations of global poverty have been going on for many years, yet the experiences and views of those featured have been notably absent. The People in the Pictures addresses that gap.  Download and read the report to find out how those who contribute their images and stories, and members of their communities, feel about their portrayal and the image-making process.

The report was launched on Tuesday evening in London at Runway East. We had a fantastic turn out of around 90 people (despite the pouring rain) and have received positive feedback from those attending.

Kevin Watkins, CEO of Save the Children introduced the launch – fantastic to have his support. Jess Crombie, Director of Creative Content at Save the Children talked about her motivation for commissioning the research and Siobhan Warrington, lead researcher, provided an overview the research itself both the methodology and its main findings.

We finished the presentations with a short film of artist Delphine Diallo talking about her creative approach to image making in relation to the work she did for Save the Children in October last year with women and girl survivors of sexual abuse in Sierra Leone.  http://www.savethechildren.org.uk/2016-10/evocative-new-photo-series-marks-international-day-girl

Staff from WaterAid, Concern Worldwide, Oxfam, Comic Relief and Save the Children set up ‘stalls’ to share examples of their recent visual storytelling to those attending the event.  These included, WaterAid’s virtual reality film Aftershock, Concern Worldwide’s outdoor exhibition Build Hope in the City , Artists Almar Hasar and Nick Ballon’s 6 stories to mark 6 years of conflict in Syria for Save the Children, the My Oxfam App, and Comic Relief’s user-generated film from Sierra Leone Meet Ikmatu and music video by Rap Man on domestic violence. 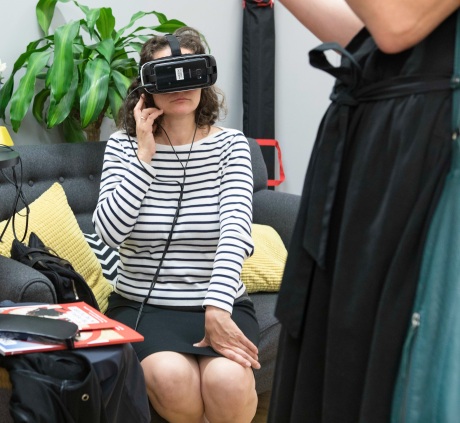 You can follow Jess and Siobhan on twitter @oraltestimony and @humanisingphoto and search #peopleinthepictures to see what others are saying about the report.